Prospective studies on the global system have shed light on the existence of great uncertainties about the configuration of the post-crisis world and provided highly contrasting scenarios for the new geopolitical landscape in the making. Nevertheless, most of the scenarios envisaged are driven by two basic trends: an unprecedented shift of economic power from West to East, foreshadowing the emergence of new world powers, and a shift towards a globalized world with increased influence of non-state actors.

Morocco is all the more concerned by these transformations since it has opted for opening up its economy as a strategic choice. Since joining the GATT in 1987, the Moroccan economy has continued to open up, through a gradual process of economic and trade liberalization, backed up by a large network of free trade agreements and a policy aimed at improving the sectoral aspects of competitiveness: infrastructure, transport, logistics, etc.

In light of the medium and long term structural transformations, IRES has, since 2009, carried out a number of studies as part of the programme of studies on "Global competitiveness and positioning of Morocco in the globalized system" in order to examine the state of the country’s competitiveness and to determine the strengths and weaknesses of its international positioning.

The objective pursued is also to propose strategic directions that will enable Morocco to enhance its competitive advantages on a sustainable basis and to secure the construction of its development project.

The innovative feature of this programme of studies lies in the fact that competitiveness is addressed according to a global and multidimensional approach that goes beyond economic and financial factors. The approach adopted is also of a structural nature, since it aims at apprehending the medium- and long-term evolution of Morocco’s overall competitiveness and is not limited to a short-term analysis of the country’s situation.

Eight thematic reports, divided into two major components have been finalized by IRES.

The first component, relating to the structural drivers of competitiveness, including human capital, also concerned the analysis of the strategic option of green economy.

The second component focused on studies related to the dynamics of reforms, i.e. the impact of reforms on overall competitiveness and the overall coherence of the free trade agreements concluded by Morocco.

A strategic summary report was prepared at the end of 2012, highlighting the main conclusions of the thematic studies, supplemented by a prospective analysis of major trends in the national and international context in order to identify scenarios for the evolution of Morocco, in terms of global competitiveness and to suggest directions for public policy, likely to strengthen the competitive capacity of the Kingdom internally and externally.

Strategic directions proposed include reviewing the Moroccan development model and seeking a better positioning of Morocco in globalization by improving its status as an attractive power.

In addition to implementing the two components of the global competitiveness programme, an additional study was conducted in 2014 on industrialization as a lever for transforming the specialization profile of the Moroccan economy. An initial study was carried out in 2015 on the System of National Accounts and the level of consideration given to structural changes in the national economy. 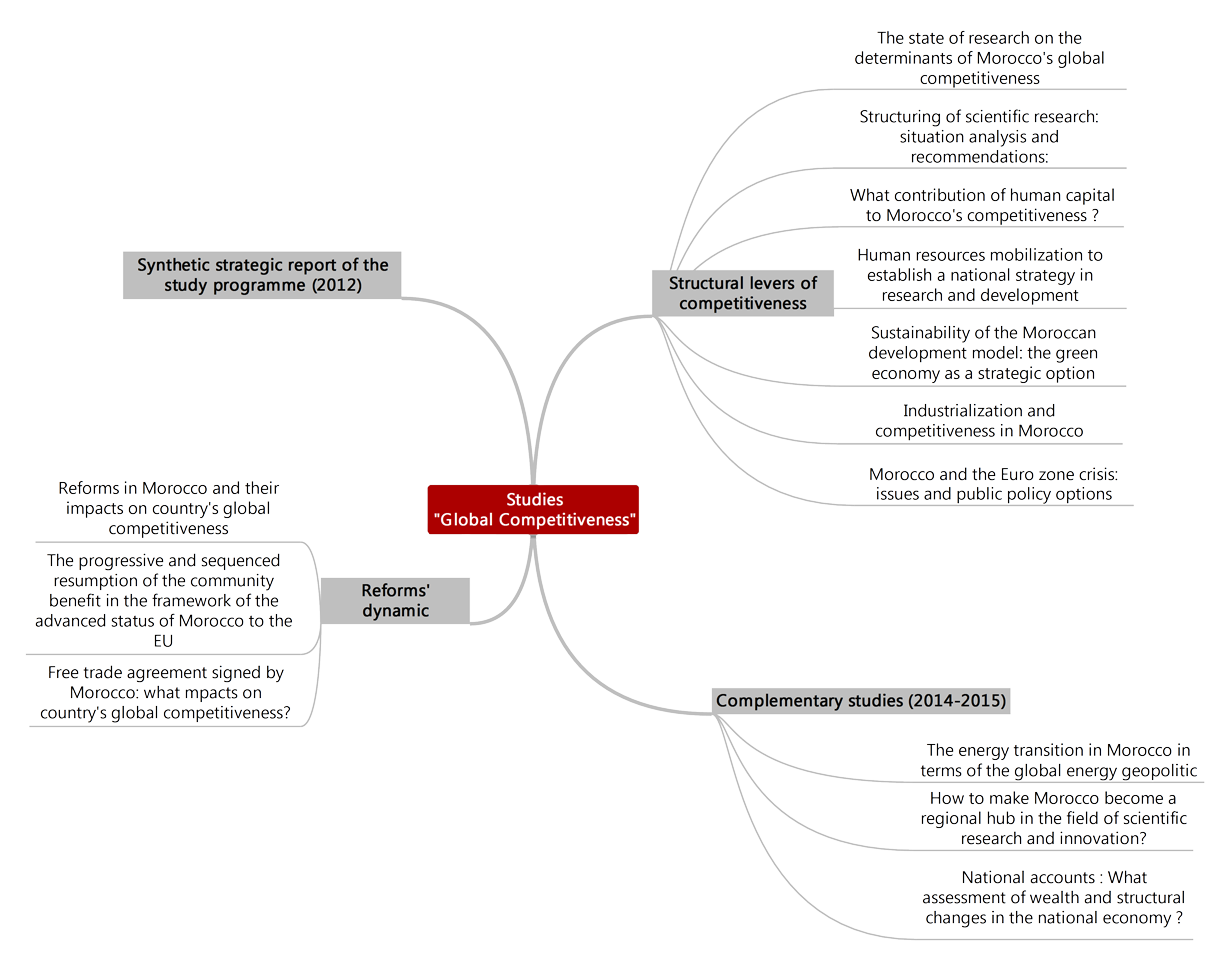 At the international level, there is growing interest in measuring intangible capital, which is justified by the fact that economies are becoming increasingly intangible.

At the national level, His Majesty King Mohammed VI requested during the Throne Speech of 30 July 2014, that an overall assessment of Morocco’s achievements over the past fifteen years be conducted using the concept of intangible capital. Through this Royal Initiative, Morocco is one of the first countries that have made the voluntary and deliberate choice to conduct an assessment of their global and intangible wealth and to develop new tools to monitor public policies.

Intangible capital is indeed an innovative concept. The concept is complex and not easy to identify, because of its multidimensional scope and the difficulty of measuring it, using data from traditional accounting systems. It was first introduced in business and then at the country level, thanks to the reports prepared by the World Bank and OECD.

The approach based on the concept of intangible capital has the merit of providing a coherent framework for evaluating public policies, and helps to understand the dynamics of national wealth creation, identify its internal and external drivers and optimize the process of designing and implementing reforms and public programmes. This approach also makes it possible to bring the internal and external dimensions of the country’s strategic choices into harmony by making them complementary and interdependent.

Thanks to its competence in the analysis of emerging concepts, IRES got in touch with Goodwill-Management firm to undertake the evaluation of Morocco’s global wealth and its intangible capital for the period 1998-2013, according to a collaborative approach, based on:

This evaluation was the subject of a preliminary report, carried out by Goodwill-Management and submitted to IRES at the end of December 2014. It was completed by IRES through a detailed analysis of the evolution of each of the components of global wealth and the formulation of public policy proposals, relating to the different dimensions of intangible capital.

The strategic report, prepared by IRES on intangible capital in May 2015, highlighted the most difficult obstacles to be addressed by the public authorities as a priority, in order to enable Morocco to improve the well-being of its citizens and to eventually reach the rank of emerging countries. The report also made proposals to integrate the concept of intangible capital in the design and implementation of public policies. To help popularize the concept of intangible capital, IRES held several meetings at the Institute’s headquarters and facilitated conferences organized by national institutions around this theme. 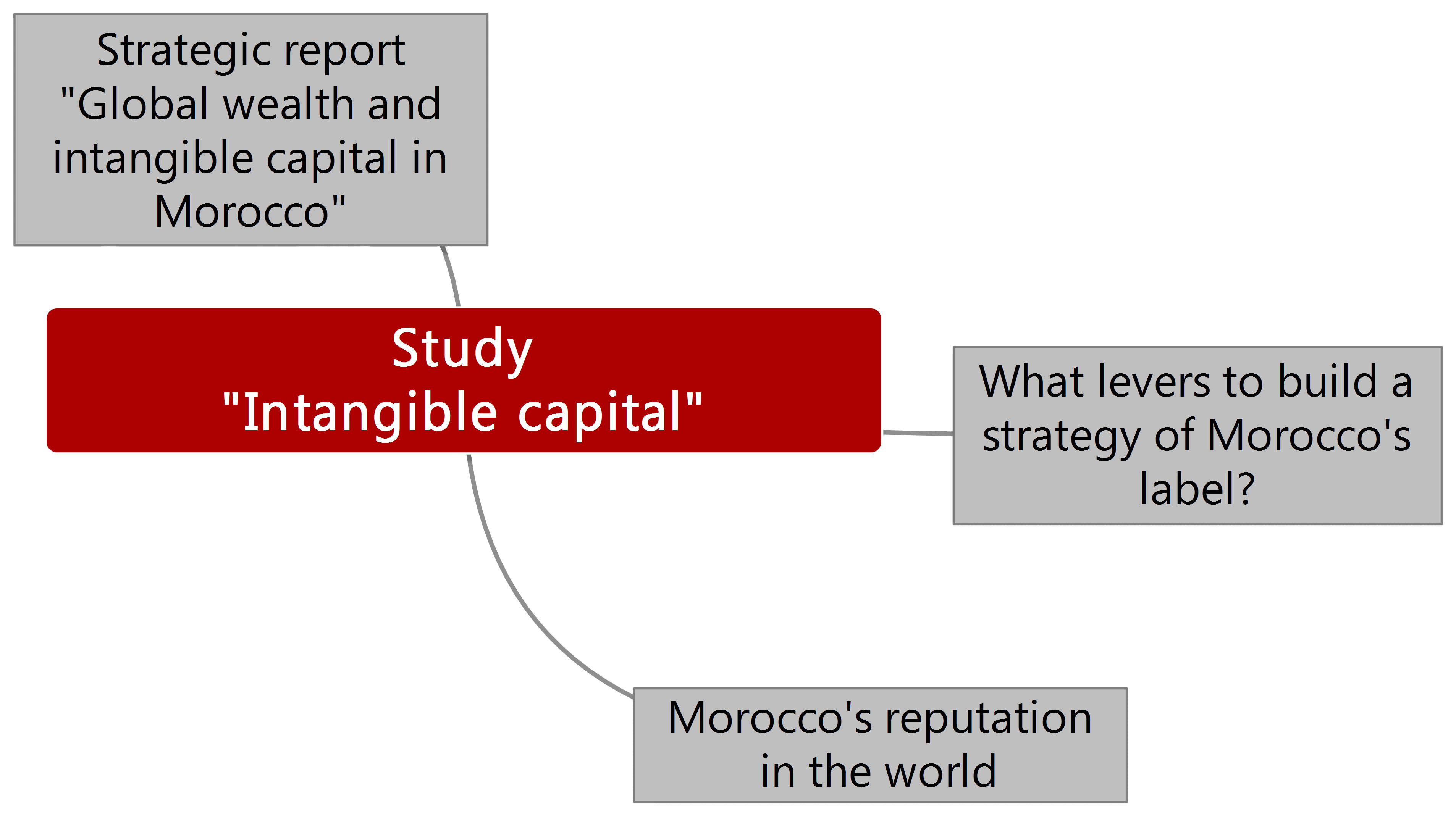 In keeping with its interest in the issues of global competitiveness and intangible capital, and in accordance with the guidelines of the Royal Speech to the Parliament in October 2017 (CHECK), IRES has paid particular attention to reflecting on the development model.

Thus, IRES has prepared a study on "Morocco, a future emerging country: what strategy to accelerate Morocco’s transition to an emerging country status" and a report dealing with the issue of employment and value creation at the international level. The main objective of this report was to examine the specific analytical dimensions that have or may have an influence on the relationship between "employment" and "value creation".

IRES’ research work on the development model was crowned by the elaboration of a strategic report (Cf. Morocco Panorama in the world ), devoted to the global systemic issues that should be taken into consideration when setting up a new development model for Morocco, a report that takes into account all the conclusions of the Institute’s work on the social bond, global competitiveness and intangible capital, climate change and international relations.

IRES also organized in 2019 two conferences on the development model. The first one, in partnership with the Main Group of Partners in Morocco, was intended to provide a fresh insight on the issues and challenges that the Kingdom has to take up and to formulate proposals to help move forward in the implementation of an inclusive, competitive development process likely to generate a genuine emergence of Morocco.

The work of this meeting has resulted in a summary report which attempted to highlight the areas of convergence observed in the conclusions of the analysis carried out on the question of the development model, separately by IRES and the Main Group of Partners in Morocco, as well as the main ideas resulting from the debates.

The second conference was organized jointly with the "Strategic Studies and Economic Development" College, based at the Hassan II Academy of Science and Technology under the theme: "Employment and development: Towards employment-centred public policies".

The objective of this meeting was to contribute to reflecting on a crucial issue that challenges decision-makers in all countries, particularly those with a young population, often educated but without a clear professional perspective, in a context of rapid emergence of disruptive technologies, including the digital revolution.